Georgia Hardinge – Still from Everything Is Okay prod. on Vimeo.

After meeting with Georgia Hardinge and Roman Rappak to go over the brief for her film, I knew this would be a great creative project to work on. The brief was ambitious for the time we had to complete it but Georgia somehow managed to put a great little team together in a couple of weeks. There was about two weeks of pre-production, a one day shoot and then about two weeks for editing, sound design, visual effects and grading. Two weeks for post, including a couple of VFX shots, sounds like a crazy turn around but we knew the time was limited and weren’t over ambitious with the effects. We decided to go for something simple but eye-catching, that hopefully would not entail too much extra work.

Together, we decided on a “wet for dry” shot, where we would replace the tank for an industrial looking background. As always, there was a little more work than expected involved! Unfortunately, I didn’t have time to go to the recce at both the tank and the bank where the background plates were shot, so when they called from Action Underwater Studios and told me they didn’t have a green screen but they had a blue one instead, I was a little weary but thought it would work. In my head I imagined something like this: 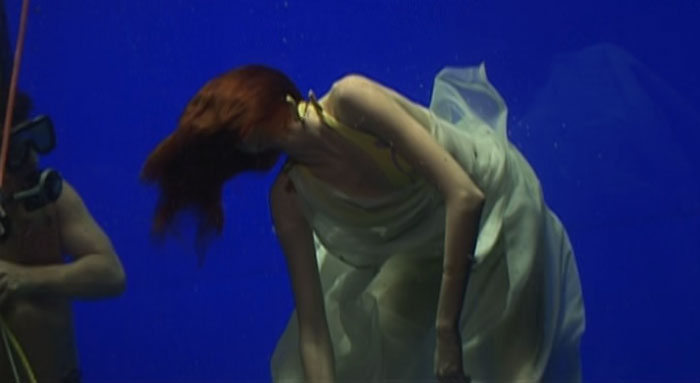 NOT a faded blue screen and slightly murky water:

After having a mild heart attack, I decided to try shooting clean plates. These ended up working really well for mid shots and close ups where the blue screen was slightly out of focus. For the wide, which was always going to be the main visual effects shot, it worked but there were little bits of roto involved here and there. This was mainly a cleanup job; getting rid of the weights that were pulling the model, Julie Bruyere, down, removing the divers that were constantly coming into shot to give her air, wires and underwater lights.

For the first part of the main visual effects shot I did the cleanup, then defocussed the background to get rid of all the creases in the blue screen and give the shot more depth. Secondly, I added a couple of rays of light coming in from the top of the screen. For the second part of the shot (wet for dry), I pulled a difference key and comped her over a still of the old Natwest bank we shot in, before adding some grain to tie it all up in the end. The still was taken on Canon 600D by the DOP Gareth Munden.

The screening took place during London Fashion Weekend in Sommerset House at the Canon space. Hopefully we’ll be working together again on projects to come.